Wow.. the end of the year .. and what a year its been…. I have had so much that has happened this year I wanted to do a kind of list of things that have happened the good, the bad and the ugly.

1) Started the year with the usual intent to do something interesting and exciting. So I became a shareholder/partner of the local bar in Bin Jiang District in Hangzhou city.  This was a good move and has proved to be a door for many things.

2) Beginning of the year I also got divorced.  This was one of those ugly things.. but it proved to be the best thing that ever happened to me.  I realized that I need to really consider my own feelings and happiness instead of focusing on making other people happy.   After the divorce I started dating and that was a whole lot of drama.

3) I got promoted at my school to Head of Student Management… but then after a month it was taken away and the position was eliminated.   That how things roll in china when you work for a Chinese company.  They will just move you up and down without a care to your career goals.

4) Started dating a guitarist and started learning guitar.  No matter how much of an asshole he turned out to be.. I still have to thank him for introducing me to the guitar… I am enjoying every minute of my learning experience.  Although I lost my free teacher, yYouTube has been a great help to me.

5) I started my own band Brown Rice… and sing rock cover songs at the bar.  I get a lot of  adrenalin from playing in a band and being the lead singer was like an impossible dream come true.  I may not be the new Joan Jett.. but I can cross that off my bucket list.

6) I became the Asst. General Manager of the bar.  Yes.. they saw the potential i had in management and the skill I have in advertising and marketing.. which I love, love, love…. that is the job I live for.   So I stepped down from being the lead singer of the band and became the band’s manager and bar manager…. while still teaching of course….(gonna keep the big money coming in)

7) I briefly dated a Chinese Biker… I am all about the wild and the crazy…. and dating a biker although short-lived was very exciting and wild..(that is basically why I had to cut it a little short… a little too wild) but made some wonderful new biker friends that will probably last a life time. 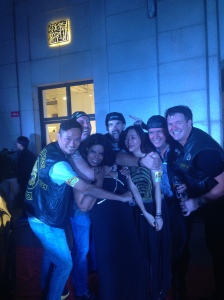 8) Big changes at my teaching job… the company decided to change locations to a town about an hour away from where I currently live.  I have to ride the bus…. to and from work.. an hour each way … everyday…. Makes me consider some career changes.

9) I got some new tattoos.. yep.. I am a tattooed bitch.. the cool thing about tattoos is that you can control what you want to put on your body.. and it doesn’t matter what anyone says… it’s very freeing.

10) Met the current man of my dreams….. Jet… a former gangster turn good… and a man who will do anything to keep me happy.  The sweetest kindest man.. I have ever met in my life honestly. If I was ever going to marry again… in the far, far, far future… this would be the man.

11) I decided to by an ebike.. yep.. after living in china for now 8 years.. I broke down and bought an electric bike.. that everyone rides here.. Jet taught me to ride it properly and now I am riding like a …. BOSS!

12) Found out that my recently divorced ex-husband remarried six months after our divorce.  Kind of quick?  Maybe that tells me that he had someone on the side.  He married a local Chinese girl… I don’t wish him bad luck.. but Karma.. my have other ideas.

13） I decided to do my own business here in China.. it is very complicated to know all the freakin’ rules here.. but with some very good “relationships” that I have formed over the years.. and my stud by my side….. I am going to get this done.  I have started putting together a clothing line.. for club wear.. ladies that are Divas… in charge of their lives.   People who are proud of their bodies no matter what size they are.  My new company is called “Dragon Designs”  I am going to be selling on Amazon.com and taobao.com… and working on my own site.

I am really trying to start preparing for my future retirement business.  Oh know I will never stop working and stop experiencing life.. I just can’t that would be crazy.  I am now deciding on which country to retire in.   I am thinking either Malaysia, Philippines, or Colombia, South America.  Whether I eventually marry Jet or not… that is my plan.   Why not come back to the states? Well, I have realized that my life has improve tremendously since I move away… and I feel less stressed and less overwhelmed.   I love my country and I will never give up being American… I love being American.. and I will visit my family as much as I can… but  for me… living abroad is a good thing.  And from what I can see on the news these days a little safer.  I hope to bring my kids to visit me when I retire… for now I will visit them in the states every year or so.

So that’s kind of my life in review over that past year… there has been some crazy moments.. and some great  times. I have met many great people and did some great performances, like when I dresses as an avenging angel on Halloween.

What will the New year bring?  Hopefully… more love, joy and happiness.  I also hope there will be great success in my new business venture.  I have learned to live life to the fullest and not to worry about what others say about you.. but… Honey…. You only have this life.. make it Amazing…..Boo